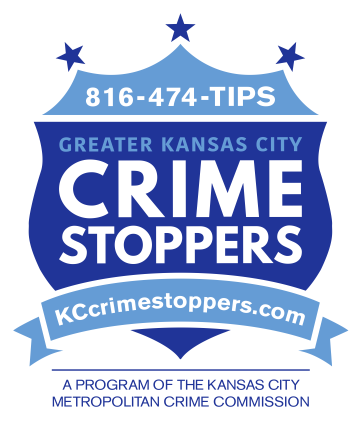 Crime Stoppers Benefits Everyone in the Metropolitan Area, not just Kansas City.  We are not the Police Department.  We are a Non-Profit Community Organization.

For general questions about Crime Stoppers contact us at tips@kc-crime.org (Do not use this email to submit a tip:  it is not anonymous. To submit an anonymous tip, click the "Give a tip" button on the left).

Crime Stoppers encourages members of the community to assist local law enforcement agencies in the fight against crime by overcoming the two key elements that inhibit community involvement: fear and apathy.  Crime Stoppers provides a telephone number and Web Tips to encourage citizens in the community to volunteer vital information helpful to law enforcement agencies to fight against crime.  Callers can remain anonymous and are eligible to receive a cash reward if the information given leads to an arrest or grand jury indictment of a felony offender.

The Greater Kansas City Crime Stoppers hotline is a vital resource in helping reduce crime in our community.  With its triangle of cooperation between the citizens, the media and law enforcement, Crime Stoppers is dedicated to putting criminals behind bars while building a foundation of trust and support.  The goal of Crime Stoppers is to make the streets safer for our families and neighborhoods.

Since the inception of our local program in 1982 the “TIPS Hotline,” as it is more commonly known, has taken 154,626 TIPS from concerned citizens.  Those TIPS have aided in the arrests of more than 11,348 criminals and the clearing of 25,313 felony cases or warrants.   Among these statistics are solving of 654 homicides, the capture of 3,842 wanted fugitives and arrests in 1,664 robberies, among many, many other serious crimes.  Additionally, over $1,513,400.00 in cash has been paid out to anonymous TIPSTERS.  It is a well-documented fact that criminals tend to keep committing crimes, thus the sum total of arrests from Crime Stoppers TIPS has undoubtedly prevented thousands of other crimes from occurring.

A forty-member volunteer citizen board of directors oversees our Crime Stoppers TIPS Hotline, which is a nonprofit program under the 501(c)(3) umbrella of the Kansas City Metropolitan Crime Commission.  These people give of their time and resources because they believe in the Crime Stoppers mission and want to keep the entire metropolitan community a safer place.

Why Do We Need Crime Stoppers?

There is a saying in police work that “Somebody always knows.”  Many of these people, however are reluctant to talk to police.  There are two main reasons…

· Fear of Reprisal
· Apathy – “Why should I get involved?”

Crime Stoppers breaks through these barriers.  The fear of reprisal is countered by allowing callers to remain completely anonymous.  They never have to speak directly to police or testify in court.  Obviously it is usually better for detectives to know who has information so they can better investigate, but the credo of Crime Stoppers is “Better anonymous information than no information at all.”

The offering of cash rewards crosses the barrier of apathy.  Although many people refuse rewards, the availability of cash is an incentive to many callers who may not have otherwise given information.

Our Crime Stoppers program works closely with all area media in issuing press releases, providing photos of wanted fugitives, and suggesting story ideas for newscasts and print.  Crime Stoppers is an invaluable asset to the community in the fight against crime in that it gives citizens a safe, secure means to give information that may help solve crimes.